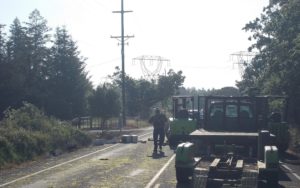 Deputies learned the green 2004 dual axle Ford flatbed truck driven by Cesar Gonzalez, of Albany, was traveling east on Hwy 226 near Richardson Gap Road. The truck is owned by Olsen Honey Farms and workers were transporting a truck load of beehives totaling over 100,000 bees. Deputies learned the passenger side rear wheels sheared at the lug nuts and separated from the vehicle, disabling the vehicle in the middle of the roadway.

Olsen Honey Farms responded to remove the beehives from the flatbed truck. They told deputies the beehives needed to be removed before the sun caused them to overheat. As workers were unloading the beehives with a fork lift, a load of beehives tipped over and fell onto the roadway, causing thousands of bees to vacate the hives and form a large cloud of bees over the roadway. Bee keepers were able to collect some of the bees and secure the beehives.

During the incident the Oregon Department of Transportation assisted deputies with re-routing traffic around the incident. As a result, Hwy 226 was closed for approximately two hours during this time.