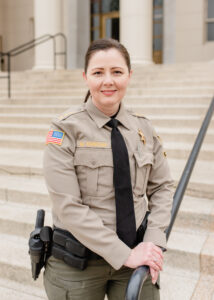 Michelle Duncan was appointed as the 41st Sheriff of Linn County on January 1, 2022 to finish outgoing Sheriff Jim Yon’s term after his retirement.  Michelle first began her career as a Resident Deputy, then was selected to work as a Detective specializing in narcotics cases. After Detectives, Sheriff Duncan was promoted through the Criminal Patrol Division at every rank, including Patrol Sergeant, Patrol Lieutenant, Patrol Captain and then as the Undersheriff.

While serving Linn County, Michelle has had a wide range of experiences.  She has investigated all levels of crimes, developed policies and procedures, and assisted in the implementation and budgeting of several major projects.  Michelle has led both the Defensive Tactics and Field Training and Evaluation Programs teams.  She has served as the Incident Commander on major events such as the Willamette Country Music Festival and 2020 Wildfires.

Michelle has an Associate Degree and holds her Management Certification from the Department of Public Safety Standards and Training.  She has completed Oregon State Sheriff’s Association Command College.

Michelle is married and has an adult son and teenage daughter.  She enjoys camping, hiking, gardening, cooking and sports.