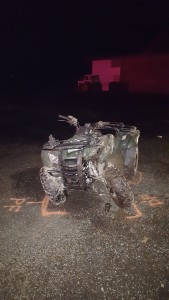 Deputies learned Parker works at a farm near this location and was not wearing a helmet at the time of the crash. The investigation reveals Parker drove her ATV from the farm onto the roadway where she was struck by a pickup traveling northbound. It is unknown at this time if she was operating her ATV with lights on or why she was on the roadway. Deputies found a large Black Lab dog was also hit and killed during the crash. At this time, it is unknown why the dog was on the roadway and deputies are attempting to find the dog owner.

The operator of the pick-up, 27-year-old Brian Levi Beckler, is cooperating with the investigation. Beckler was not injured and had his headlights on at the time. Beckler was wearing his seat belt.

Deputies are being assisted in the investigation by the Multi-Agency Investigation Team (MAIT).