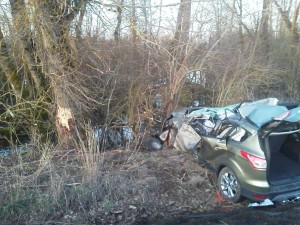 The investigation reveals Ms. Birky and her passengers were returning to Sweet Home from Albany. They were traveling east on Spicer Road. As she approached the intersection of Tallman Road, she failed to negotiate the sweeping right hand corner near the intersection. She drove straight through the corner, crossing through the opposing westbound lane of travel and onto the shoulder.

The driver’s side of the car was driven into the ditch and immediately struck a tree at windshield level. The roof of the vehicle was peeled back past the front half of the car and it appears that Ms. Birky, and the front passenger, Mr. Helvey, were both struck by the tree.
All passengers were wearing seatbelts and all air bags were deployed. It does not appear that alcohol was a factor in the crash.

AAsum-Dufour Funeral Home of Albany responded and removed the bodies from the scene of the crash.