Linn County Sheriff Bruce Riley reports that today, at 1:03 a.m., deputies responded to 900 South Hwy 99E, Harrisburg, for a report of a semi-truck that crashed into the Harrisburg Public Works building.

The investigation revealed a 2014 Freightliner truck pulling a trailer loaded with steel was northbound on Hwy 99E. While crossing the bridge over the Willamette River into Harrisburg, the right rear axles of the trailer struck the bridge. The truck and trailer left the roadway, crashed through a chain link fence and struck the side of the Harrisburg Public Works building, before coming to a stop. 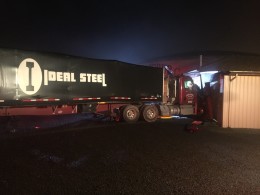 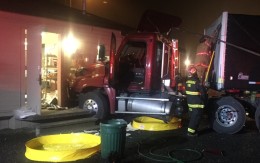 The operator, identified as Sergio Villa Garcia, 50, from Springfield, told deputies he picked up his load in Eugene and was on his way to Portland. Garcia said he felt the trailer pull hard to the right as he was driving over the bridge into the city of Harrisburg. Garcia told deputies the trailer then struck the bridge causing him to lose control.

Harrisburg Fire Department and Paramedics responded to the scene and transported Garcia to McKenzie-Willamette Hospital in Springfield where he was treated for minor injuries. The Public Works building was not occupied during the time of the crash. The building sustained significant damage to the north and west walls.

It appears operator error may be the cause of the crash. Speed, alcohol, or drugs do not appear to be factors in this crash.

Deputies were assisted by the Harrisburg Fire Department and Harrisburg Public Works.