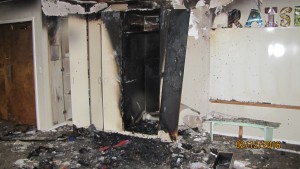 Fire personnel from Albany Fire Department were dispatched to the school and were able to contain the fire to one downstairs classroom. No injuries were reported and at this time, there is no estimate of damage to the building.

Albany Fire Department personnel requested a deputy to investigate the fire, believing it was suspicious.

At the time of this release, deputies are still on scene conducting their investigation.