A blue 1998 Ford Escort driven by Bernadette Crowe, 25, of Albany, was southbound on Seven Mile Lane when for unknown reasons drifted off the roadway into a steep ditch and rolled several times before coming to rest straddling the ditch. Also in the vehicle were Crowe’s two small children, ages four and one years old. 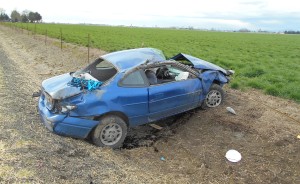 Crowe was ejected during the crash and sustained serious injuries. She was transported by ambulance to the Good Samaritan Hospital in Corvallis. The two minor children were also taken to Good Samaritan hospital and treated for minor injuries.

The investigation is continuing and alcohol does not appear to be a factor in this crash.