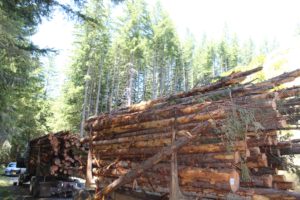 Linn County Sheriff Bruce Riley reports his deputies are investigating a fatal logging accident reported July 27th at 11:52 a.m. The accident occurred near milepost 14 of U.S. Plywood Mainline off of Trask Road, outside of Lyons. This property is owned by Weyerhaeuser Columbia Timberlands and is currently being logged by Ridgeway Logging, Inc.

The victim, Jerry Dean Sramek, 55, of Salem, was a contracted independent truck driver and had just loaded logs from the logging site and was in route to a mill. Sramek was found by Brent Richmond, another truck driver traveling the same route at about 11:26 a.m.

The investigation revealed Sramek stopped to re-secure his load on the trailer approximately four miles away from the landing site where he was loaded. When he undid the forward chain, a log approximately 20 feet long and ten inches in diameter, fell from the top of his trailer onto Sramek causing fatal head and neck injuries.

Sramek was found to be wearing the proper protective equipment.

OSHA and the Linn County Medical Examiner were both notified due to this being a job-related death.

Deputies were assisted by the Lyons Fire Department.

Weddle’s funeral home of Stayton responded and removed the body from the scene.