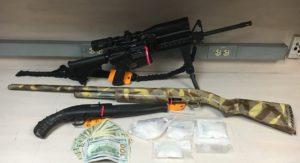 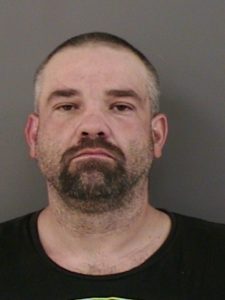 Linn County Sheriff Bruce Riley reports that on August 4, 2016, at 3:10 p.m., the Linn County Sheriff’s Office served a search warrant on Gary Gene Deal, 40, at his residence in the 37000 block of Pony Lane in Lebanon. The search warrant was a result of a year-long narcotics investigation and a reported rape that occurred during June of this year.

Among the items seized by Investigators was evidence relating to the rape, approximately six ounces of methamphetamine, digital scales, packaging material, drug paraphernalia, drug records, surveillance cameras, stolen property, eight firearms, and $4,284 in cash. Of the firearms seized, a Glock .380 pistol was reported stolen to the Salem Police Department in January 2016 and was located on Gary Deal at the time of his arrest. In addition, a Ruger AR-556 rifle was reported stolen to the Albany Police Department within the past week, a Mossberg .22 Caliber rifle had the barrel cut to nine inches in length, and a Remington 20 gauge shotgun had an obliterated serial number.

The investigation is continuing and additional charges are pending. Anyone with information on the reported rape is asked to contact Detective Brandon Fountain at (541) 917-6667.

The Linn County Sheriff’s Office was assisted by the Lebanon Police Department.