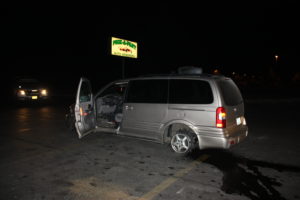 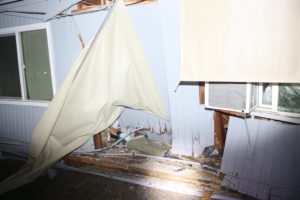 Linn County Sheriff Bruce Riley reports on August 07, 2016 at 10:38 p.m., Deputies responded to 33808 Melody Lane, east of Corvallis, for a report of a car that crashed into an apartment complex.

The investigation revealed a 1999 gold Pontiac Montana van, had driven around to the back side of the apartment complex onto the lawn. The van then intentionally drove into the back wall of one of the apartments causing extensive damage and then left the scene.  Although the residence was occupied at the time of the crash, no one was injured.  The gas line into the apartment was ruptured and Corvallis Fire Department responded to the scene to shut the gas off.

During the course of the investigation, the operator, Steven Ray Pugh, 35, of Corvallis, drove the van back to the apartment complex where he lived and crashed into. Pugh refused to stop for the deputies and returned to Hwy 34 driving east. Deputies pursued Pugh on Hwy 34, reaching top speeds of 55 MPH.

Upon reaching the city limits of Albany, members of the Albany Police Department spiked all four of Pugh’s tires. The pursuit continued east on Queen Avenue to Pacific Boulevard, and then east on Santiam Hwy where Pugh’s tires began to come apart.

Pugh lost control of his vehicle and stopped in the parking lot of Pick-A-Part located at 4646 Santiam Hwy SE, Albany.

Pugh was taken into custody and charged with Criminal Mischief I, Reckless Endangering, Fail to Perform Duties of an Operator, and Attempting to Elude Police.

This case remains under investigation.