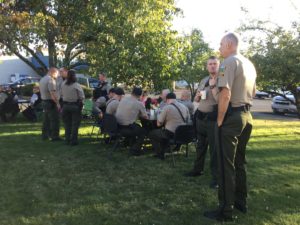 Last night, in celebration of First Responder Appreciation Day, local business woman Michelle Robinson, accompanied by her family, and a group of volunteers. served hot dogs, side dishes, and fantastic root beer floats to local law enforcement across Linn County.  While food was prepared and delivered by volunteers to the Albany office of the Oregon State Police, the Corvallis Police Department, Benton County Sheriff’s Office, and the Lebanon Police Department, Robinson and her team served hot dogs right off the grill in the front yard between the Linn County Sheriff’s Office and the Albany Police Department.

Michelle Robinson and her children are continuing their efforts to show support to local law enforcement, as they have been since after the shootings of police officers in Dallas earlier this summer.  Originally from Texas, Robinson told Sheriff Bruce Riley, “we want to change the perception of law enforcement, and show our support [for you].” Robinson’s event was a fantastic success, and was scheduled to maximize attendance by being scheduled around the shift changes for both Sheriff’s Office Patrol and Jail staffs, as well as the City’s police shift change.

Today was the first of many events Robinson and her growing group of volunteers have planned.  They are planning an event for the third Wednesday of the odd months of the calendar, with November’s event being hot soup.  Volunteers include Michelle, her husband Brad and their children, Sarah Webb, Kathy Martin, Dena Blacklaw, Will Tucker, and Dani Marlow.  Businesses are also stepping up with donations, including local CoEnergy Propane and Albany Lock & Key.  Donations have also been received from friends at Robinson’s church, from her neighbors, and the volunteers themselves.

If you are interested in helping Michelle Robinson’s efforts, she may be reached at michelle@furnitureshare.org.