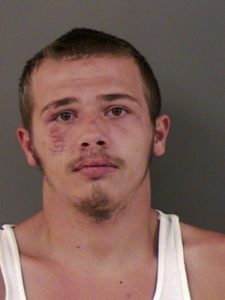 Linn County Sheriff Bruce Riley reports today his detectives arrested Kristian Ray Lee, 19, of Lebanon, in connection with seven fires. The fires started in the ditch line in the 37000 block of Rock Hill Drive, Lebanon, between July 30, 2016, and August 28, 2016. The Lebanon Fire Department responded to all of the fires and were able to control them in a short time. The largest area burnt was approximately three quarters of an acre in size. The Lebanon Fire Department and Oregon Department of Forestry deemed all seven fires were suspicious in nature.

Detectives were eventually able to identify the person caught on camera as Kristian Lee. Detectives learned Lee lives approximately half a mile from where the fires were set.
Detectives also learned that Lee turned himself into the Linn County Jail on August 29, 2016, for unrelated charges.

Detectives interviewed Lee and he confessed to starting five of the fires.

As a result of the investigation, Lee was arrested and charged with four counts of Arson I, Reckless Burning, and five counts of Criminal Mischief II.

The charge of Arson is a result of forest land being threatened by the fires.