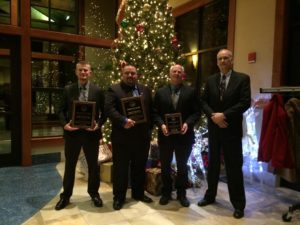 Linn County Sheriff Bruce Riley is pleased to announce that three of his deputies were recently recognized at the Oregon State Sheriff’s Association 2016 Annual Conference held in Bend, for their exceptional service to the citizens of Linn County.

Deputy Colin Pyle and Deputy Ryan Keys were awarded the OSSA Medal of Valor for their heroic act during the officer involved shooting that happened March of 2016. Both suspects were taken into custody and are awaiting trial on several charges. Deputies Pyle and Keys placed their own lives in danger to help keep our community safe.

Detective Lieutenant Robert Clark received the OSSA Life Time Achievement Award for his 35 years of dedicated service to the Linn County Sheriff’s Office Dive Team. The Dive Team is a unique team that dives the waters of Linn County at all times of the year making rescues and recovery of both evidence and bodies.  It is an assignment that is often both physically and mentally demanding.  Lieutenant Clark has unselfishly responded to numerous calls in all kinds of weather, at all times of the day and night.  He has also assisted other agencies whenever called.  As an example, in December of 2008, he assisted the FBI and Oregon State Police in recovering evidence related to the Woodburn bank bombings.  The weather was below freezing, with very cold temperatures, but Lieutenant Clark did not hesitate to help when called.  Lieutenant Clark’s 35 years of service is a testament to his dedication to the Linn County communities.

Sheriff Riley would like to express his own thanks to Deputy Pyle, Deputy Keys and Lieutenant Clark for their service and commitment to Linn County and its citizens. “They are fine examples of the devoted men and women that represent the Sheriff’s Office and serve their community at the highest level on a daily basis.”

In the picture attached from left to right are Deputy Pyle, Deputy Keys, Lieutenant Clark and Sheriff Riley.