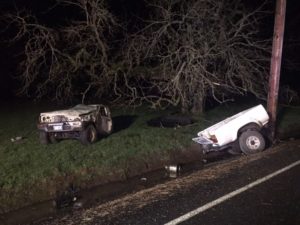 Linn County Sheriff Bruce Riley reports on February 22, 2017, at 9:04 p.m., deputies responded to a single vehicle crash that occurred on Powerline Road near the intersection of Diamond Hill Drive, east of Harrisburg.

Upon arrival, deputies contacted the driver and sole occupant, a 17- year-old juvenile male from Halsey. The investigation revealed the driver was traveling north on Powerline Road when he lost control of his white 1989 Toyota pick-up, while negotiating a sweeping left hand curve.  The vehicle rolled and struck a utility pole, causing the pick-up to be torn in half.  The driver was able to exit the vehicle and walk to a nearby residence to call 911.

The driver was transported to Riverbend Hospital in Eugene by medics and was treated and released for minor injuries. The driver was wearing his seat belt and it does not appear that alcohol or drug consumption was a factor in this crash.

Linn County Deputies were assisted by the Harrisburg and Eugene Fire Departments.