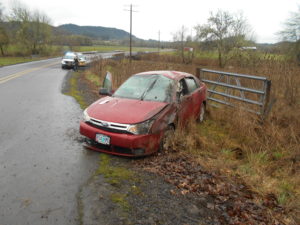 The driver of the red 2010 Ford Focus has been identified as Sandra Dee Chaffin, 53, of Lebanon. Chaffin was transported to the Lebanon Community Hospital where she was treated for minor injuries and released.

The passenger was identified as James Fuller Plymell III, 42, from Lebanon. Plymell was in the front passenger seat at the time of the crash.  He was transported to Good Samaritan Hospital in Corvallis with serious injuries and has not been released.

The investigation reveals Chaffin was traveling west on Upper Berlin Road. As she began to negotiate a gradual corner, she drove onto the shoulder which caused her to hit the culvert at the intersection of Berlin Ridge Road.  This impact significantly damaged the front end of the vehicle and catapulted the vehicle into the air.  When the car came back to the ground it rolled one time before coming to rest.  The crash was not witnessed by anyone and was found moments after by a passerby.

Chaffin was arrested and taken to the Linn County Jail on the charges of Assault III and DUII.

Linn County Deputies were assisted by members of the Lebanon Fire Department. The investigation is continuing.