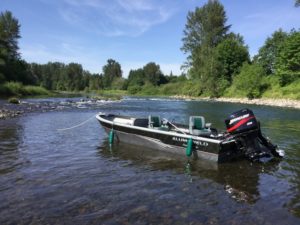 Linn County Sheriff Bruce Riley reports the Sheriff’s Office Water Rescue and Recovery Team responded this morning at approximately 8:22 a.m., to assist the Lebanon Fire District with a marine incident on the South Santiam River. The Linn County Sheriff’s Office 9-1-1 Dispatch Center received a call from the wife of one of the injured boat occupants, who stated the boat her husband was in had hit a rock, and all three occupants were thrown from the boat.

The operator of the 2002 Alumaweld Jet Sled, later identified as Clayton Newton IV, 47, of Portland, told deputies he was traveling downstream from Gills Landing boat launch in Lebanon, when the sled tipped while he was traveling through shallow rapids. All three occupants were thrown out of the boat. All occupants were wearing personal flotation devices, which aided in them reaching shore safely.

Fishing with Newton in the boat were Colby D. Howe Jr, and James E. Nocolaisen, both 69, from Portland. Newton was not injured and Howe and Nocolaisen both suffered only minor injuries.

Lebanon Fire District personnel were able to locate the boaters, and were aided by 9-1-1 GPS coordinates from the boaters’ calls. LFD personnel reached the patients on land, rendered aid to their injuries, and transported them to their vehicle at Gills Landing.

Sheriff’s Office Water Rescue members launched their Zodiac rescue craft, to determine if any environmental spills were endangering the waterway, to assess the boat crash, and conduct a boat investigation as required by Oregon State Marine Board law. The Alumaweld was intact, and had only suffered minor dents and scratches from the crash. Sheriff’s Office personnel navigated the jet sled to a nearby boat landing, where it was trailered and returned to the owner.

Sheriff Riley wants this early-summer boating incident to serve as a reminder to all boaters the importance of wearing life jackets while enjoying water activities. River channels change from season to season, new obstacles are presented in different locations after each winter, and the daily changes in water flow create unfamiliar conditions to even the most experienced of boat operators.

Never operate any watercraft under the influence of any alcohol or intoxicant. Always wear your life jacket. Always be prepared, and have fun throughout the waterways of Linn County!