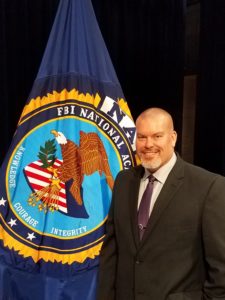 Cpt. Guilford and a total of two hundred and twenty-seven other law enforcement professionals attended the 268th Session of the National Academy, which consisted of men and women from 47 state agencies, law enforcement organizations from 24 international countries, five military organizations, and seven federal civilian organizations.

There is a highly competitive process that law enforcement must go through before being selected for this honor. This process included a nomination by Sheriff Riley; interviews of Cpt. Guilford and co-workers to determine leadership skills and abilities; a background check; a determination of physical fitness; and the support of former National Academy graduates within the candidate’s organization.

Cpt. Guilford has more than 23 years of law enforcement experience, starting as a reserve deputy with the Linn County Sheriff’s Office in 1994. Cpt. Guilford was hired for full time employment in 1995 as a resident deputy, working the Mill City area. He has since served his community as a D.A.R.E. officer, marine deputy, defensive tactics instructor, Dive Team member, reserve coordinator, Patrol Sergeant and Patrol First Sergeant.