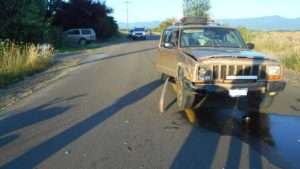 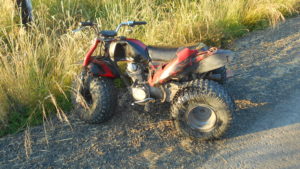 Linn County Undersheriff Jim Yon reports on July 4, 2017, at 7:50 p.m., deputies responded to Territorial Road near Powerline Road, east of Harrisburg, for a report of a crash involving a vehicle and ATV.

The investigation revealed a 1999 Jeep Cherokee was traveling west on Territorial Road at 45 MPH when a three wheeled ATV crossed the road in front of the Jeep. The Jeep Cherokee was not able to stop and struck the ATV.

The operator of the Jeep Cherokee, 27-year-old Bobby Junior Hill of Springfield, told deputies that he and 29-year-old Melissa Lynn Cronin of Sweet Home, were on their way to watch the fireworks display in Harrisburg. The operator of the ATV, 18-year-old Zackary Trey Culpepper of Harrisburg, was working at the farm near the location and was crossing the road to put the ATV away when the crash occurred.

REACH Air Medical Services transported Culpepper to Riverbend Hospital for head injuries. Culpepper sustained a concussion and bruising to his hip and back. Culpepper was not wearing a helmet. Both Hill and Cronin were not injured in the crash.

Alcohol consumption, illegal drugs, and speed were not factors in this crash.

Deputies were assisted by the Harrisburg Fire Department and REACH Air Medical Services.