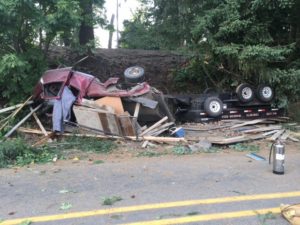 The driver of the 1990 Chevrolet pickup, who was identified as Taylor Michael Whitney-Leigh, 26, of Albany, died at the scene. The two passengers were identified as Ernesto Jazmin, 37, from Corvallis, was transported to Good Samaritan Regional Medical Center in Corvallis with serious injuries. The second passenger and nephew to Jazmin, is Benjamin Jazmin, 18, from Corvallis, was transported with significant injuries to the Albany General Hospital.

The investigation reveals Whitney-Leigh was traveling south on Stayton-Scio Road. The Chevrolet pickup was towing a dual axle trailer filled with miscellaneous concrete and construction debris. As he crested the hill there were several vehicles traveling at approximately five miles per hour, according to witnesses, due to a combine on the roadway. The combine was not involved in the crash.

Whitney-Leigh took evasive action to avoid colliding with the vehicle in front of him. The pickup went into a skid and went off of the roadway on the west side of Stayton-Scio Road rolling down the embankment, striking a tree and coming to rest on its side.

Detective Lovik and Deputy Bebeau happened to come upon the crash moments after it happened. As they approached the vehicle to render aid, the vehicle caught on fire. Detective Lovik used a fire extinguisher to keep the flames at bay while Deputy Bebeau pulled Benjamin Jazmin from the burning vehicle. Scio Fire Department personnel arrived on scene and took over efforts to extract the remaining occupants.

Linn County Deputies were assisted by members of the Stayton, Jefferson, Scio, and Albany Fire Departments. In addition the Linn County Multi-Agency Investigation Team members from the Linn County Sheriff’s Office and Lebanon Police Department responded to assist with the processing of the scene.

The investigation is continuing as to the cause of the crash.