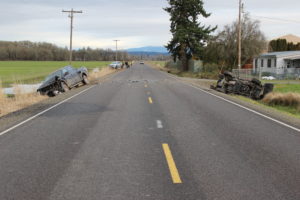 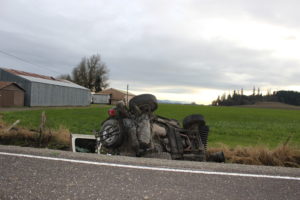 On December 18, 2017, Carol Sue Torstrom, 66, of Lebanon, and Diane Ellen Roth, 74, of Albany, were killed in a motor vehicle crash on Kamph Drive, Albany. Torstrom was driving her 2000 Jeep Wrangler westbound on Kamph Drive, with Roth as her passenger.

Torstrom slowed down to turn into a driveway when she was struck from behind by a 2012 Ford F-150 pickup being driven by Andrew Steven Lindquist, 33, of Lebanon. Deputies learned Lindquist saw the Jeep ahead of him and anticipated it would turn into the driveway. He continued traveling and ran into the back of the Jeep when it did not turn as expected. The Jeep flipped on its top and landed in the ditch.

Deputies are continuing the investigation and working with the Linn County District Attorney’s Office on the case. There is no indication that alcohol was a factor in the crash. Deputies were also assisted by the Jefferson Rural Fire Department.

Linn County Sheriff Bruce Riley reports at 2:35 p.m. this afternoon his deputies responded to a fatal motor vehicle crash on Kamph Dr. near Albany. Deputies are still actively investigating the two-vehicle crash. It is confirmed that one person has died and another has been transported to the hospital with unknown injuries.

Kamph Dr. is shut down from Scravel Hill Rd. to Bond Rd while deputies investigate. It may be a few hours before the road reopens and Sheriff Riley would like to ask travelers to find an alternate route around that area.

An update will be provided when more information is available.