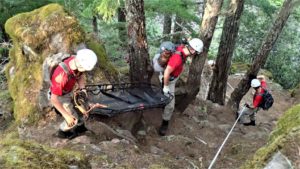 Linn County Undersheriff Paul Timm reports on July 23, 2018, at 3:43 p.m., the Sheriff’s Office received a call that a female had fallen and broken her ankle at Tamolitch Pool on the Mckenzie River. This area is also known as “Blue Pool”. 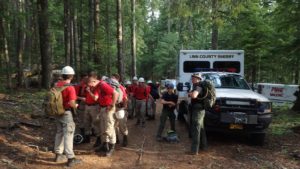 The Sweet Home Fire Department was the first to arrive and discovered that 18-year old Sarah Grace Shepler of Eugene, Oregon, was attempting to reach the pool on a very steep trail when she fell and injured herself. The female could not put any weight on her injured foot. Sweet Home Fire

Department with the assistance of McKenzie Fire Department was able to set up a rope system to move her to the trail. Once on the trail 18 Search and Rescue members from the Linn County Sheriff’s Office carried her in a wheeled stretcher to the trailhead. Once

at the trailhead, Mrs. Shepler refused transport in the ambulance.