Linn County Undersheriff Paul Timm reports that early this morning at 12:38 a.m., deputies responded to a stabbing that occurred in the 28000 block of Pleasant Valley Road near Sweet Home. The owner of the property, 58-year old Michael Speck, called 911 to report he had been stabbed by his ex-girlfriend. Speck and 56-year old Nancy Edwards had ended their relationship, but he was allowing her to temporarily stay in an outbuilding on the property. They argued early this morning because Speck wanted Edwards to move off his property and find another place to live. 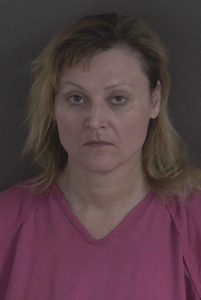 After being stabbed, Speck locked himself inside the house and called 911. While on the phone with 911 Dispatchers, Edwards broke into the house by breaking through a sliding glass door in attempt to attack Speck again. Deputies arrived at the residence and placed Edwards under arrest.

Speck was transported by ambulance to the Lebanon Community Hospital and then transferred to Good Samaritan Regional Medical Center in Corvallis. Speck’s lung was punctured, but he is listed as being in stable condition.

Nancy Edwards was arrested for Attempted Murder, Assault I, and Unlawful Use of a Weapon. She was lodged at the Linn County Jail.

Detectives are continuing the investigation. Anyone with information regarding the stabbing is asked to contact Detective John Lovik at (541) 967-3950.