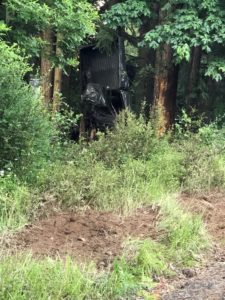 Linn County Sheriff Jim Yon reports Wednesday, June 12, at 11:45 a.m., the Linn County Sheriff’s Office received a report of a missing person. The mother of Jordan Thein, 19, called to report that her son had not been heard from since Tuesday morning and did not show up to work in Millersburg on Wednesday. She was concerned that Jordan may have driven off the road on his way home. Jordan lived on Upper Calapooia Drive.

Deputies checked the roadways and initially did not see any signs of a vehicle driving off the road. Deputies used cell phone location coordinates to narrow down where his phone was last located. The vehicle, a 1989 Toyota pick-up, was located not far from his residence on Upper Calapooia Drive, crashed into some trees. Jordan had been ejected from the vehicle and was deceased when found.

Jordan Thein’s body was removed by Sweet Home Funeral Home. The crash is still under investigation. There were no other occupants and it is unknown what caused Jordan’s vehicle to veer off the roadway.

If you have any information on this fatal crash, please contact Deputy Caleb Riley at 541-967-3950.