Linn County Sheriff Jim Yon reports deputies responded to a fatal motor vehicle crash yesterday, July 21, at 2:09 a.m. The single-vehicle crash occurred west of Sweet Home on Brush Creek Road near the intersection of Childers Road.  The crash was reported by a passerby.

The investigation reveals that at approximately 2:09am, Mr. Saari was traveling northbound on Brush Creek Road.  The investigation showed Mr. Saari failed to negotiate a curve and drove onto the gravel shoulder, then over corrected his steering, causing the vehicle to roll multiple times before coming to rest on its wheels.

Both Mr. Saari and Mr. Wilson were wearing seatbelts at the time of the crash.  Mr. Wilson had to be extricated from the vehicle prior to being transported by EMS to River Bend Hospital.  It is believed both alcohol and excessive speed were factors in the crash. 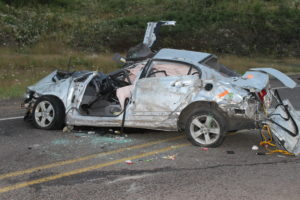