Linn County Undersheriff Paul Timm reports that on November 19, 2019, at approximately 7:00 a.m., the Linn County Sheriff’s Office received a report of a structure fire in the 38000 block of Scravel Hill Road in Albany. Initial reports indicated the structure was fully engulfed and that not everyone from the residence was accounted for. The Jefferson and Albany Fire Departments responded to the scene and extinguished the fire.

Upon further investigation, all persons and animals that were inside the structure when the fire started have been accounted for. One adult male was transported to the Albany General Hospital with minor injuries. 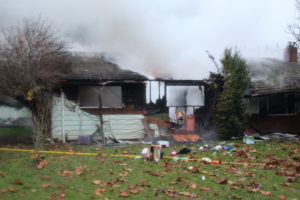