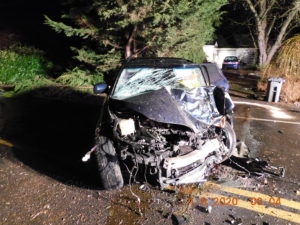 The investigation revealed Joel Hirsch, 61, of Albany, had been traveling north on Riverside Drive in his 2007 Nissan Murano.  For unknown reasons, he crossed out of his lane, through the opposing lane of travel, off the west side shoulder, struck a tree head-on and spun back up on the roadway.  Hirsch was the single occupant of the vehicle. Hirsch was wearing a seatbelt and the vehicle airbags did deploy.

Albany Fire Department personnel assisted with extricating Hirsch from his vehicle. Hirsch was pronounced deceased at the scene and taken to AAsum-Dufour Funeral Home in Albany.

The investigation is on going.  Anyone with information about Hirsch’s whereabouts prior to this crash, please contact Sgt. Scott Christensen with the Linn County Sheriff’s Office at 541-967-3950.