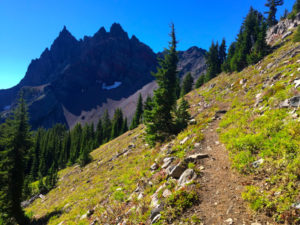 Linn County Sheriff Jim Yon reports on July 19, his Deputies responded to a rescue at Three Fingered Jack east of Sweet Home.  At about 1:00 p.m., Linn County Sheriff’s Office Dispatch received the report of a hiker falling from the mountain.

A witness describes Todd Adelman, 19, from Aumsville, climbing near the summit when rocks gave way, causing him to fall hundreds of feet. Numerous resources were activated and responded to the remote area. Adelman was located at the bottom of the cliff where he was pronounced deceased, approximately 7300 feet in elevation.  Responders worked all night carrying Adelman out.

Three Fingered Jack is a popular place for technical mountaineers and is located 71 miles east of Sweet Home. The mountain is known to have poor rock quality and steep cliffs near the summit.