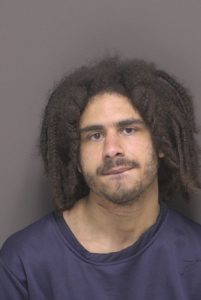 Linn County Undersheriff Paul Timm reports on August 3, at 3:53 p.m., deputies responded to the 41000 block of Marks Ridge Drive, north of Sweet Home for an armed disturbance. The caller, a resident of the location, reported the suspect, Joel Soto, 25, (who also had been staying at the location) took out a gun during an argument with him and shot it into the ground. Soto then ran off through a nearby wooded area. When deputies arrived, they searched the area but were unable to find Soto. Deputies continued to try to locate Soto over the following days.

Yesterday, August 5, at 6:50 p.m., deputies responded to another armed disturbance at the same residence. The caller reported Soto had returned and pointed a firearm at the caller.

When deputies arrived, Soto had again fled into the woods. With the assistance of two Linn County K9 units and Sweet Home Police Department, they searched the area. Soto was taken into custody after Deputy Matt Sheets and his K9, Thunder, located Soto hiding in a drainage culvert south of the residence.

Soto was found to be in possession of a Glock handgun, which had previously been reported as stolen through the Sweet Home Police Department. Soto was transported to Linn County Jail where he is facing charges of Felon in Possession of a Restricted Weapon, Unlawful Use of a Weapon, Menacing, and Theft I. Additionally, Soto is being held on an outstanding warrant issued out of New York for Assault 2.

Neither the victim or Soto were injured during either incident.