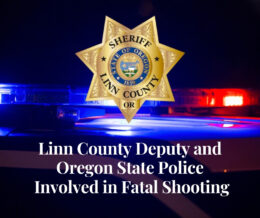 Linn County Sheriff Jim Yon states on December 8 at approximately, 11:45 p.m., a Linn County Deputy and at least one Oregon State Police Trooper were involved in an Officer Involved Shooting near mile post 38 on Highway 22, outside the city of Gates.  The deputy and troopers were not injured in the incident.

The incident is being investigated by the Salem Police Department.  Since this occurred in Marion County, the investigation will follow Marion County’s Senate Bill 111 protocols.

All media inquiries will be handled through the Marion County District Attorney’s Office.