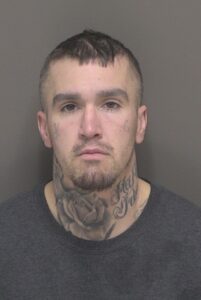 Linn County Sheriff Jim Yon reports yesterday at 3:13 p.m., his deputies responded to a report of a theft from a vehicle in progress on Knox Butte Road and Highway 226, outside of Albany. A witness to the theft had followed the suspect until the suspect drove down a gravel lane off Red Bridge Road. Deputies found the suspect, later identified as Nicholas Ames, 31, from Jefferson, at the end of the gravel lane. Ames was standing outside his vehicle, a 1997 white Mercury Mountaineer. As deputies approached, Ames jumped back in his vehicle and fled into a large farm field, eventually getting stuck in the mud.

When deputies tried to approach Ames in the field, he got out and started reaching behind his back, like he was reaching for a weapon. As Ames was in a large open field, deputies were able to watch him from a safe distance to make sure he did not leave the area, potentially endangering the public. Deputies made multiple attempts to communicate with Ames over a loudspeaker to get him to comply. Deputies watched as Ames continually moved around the vehicle, sometimes briefly exiting, holding a black object in a manner that simulated a gun. Ames was talking to someone on the phone during some of this time making statements he was going to try and get deputies to shoot him.

Ames left a red gas can outside his vehicle where he was first seen by deputies. It was learned he had burglarized a shed stealing the gas, prior to deputies’ arrival, and before he fled.

The Linn County Regional SWAT team was activated to assist. After almost three hours, Nicholas Ames eventually complied with commands and was taken into custody and transported to the Linn County Jail where he was lodged. He was charged with Theft III, Theft II, Unlawful Entry into a Motor Vehicle for the initial theft from a vehicle, He was additionally charged with Burglary II, Attempted Elude on Foot, Attempted Elude in a Vehicle, Criminal Trespass and Possession of Meth-violation.

Sheriff Yon states, “Our deputies showed great restraint and patience, which resulted in a peaceful resolution. This incident could have easily ended tragically based on Ames’s actions and blatant disregard for his own life.”