The investigation revealed Daniel Bates III, 48, of Lebanon and 10 children traveling to Central Valley Christian School were struck head on by Katherine Stark, 47, of Corvallis. Stark was driving a 1989 Nissan D21 pickup east on Airport Road when she entered the westbound lane striking the 2014 Mercedes Sprinter Van driven by Bates.

Stark received serious injuries and was transported by Lebanon Medics to Good Samaritan Hospital in Corvallis where she continues to receive treatment. Bates and the children, ranging from 5-13 years old, received minor cuts and bruising from the impact. They returned to their original destination after assistance from parents and school staff. Deputies continue to investigate the crash and conduct interviews. 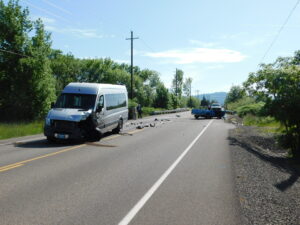 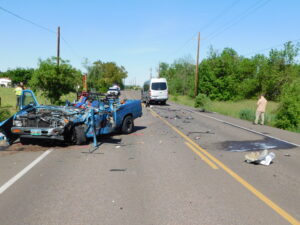