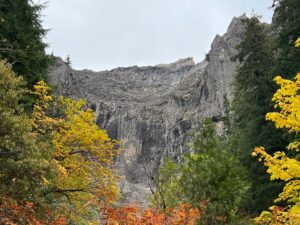 Linn County Undersheriff Michelle Duncan reports on October 16, at 5:51 p.m., Linn County Dispatch received a 911 call from a male who became stuck while climbing cliffs at Wolf Rock. Johnathan Takle, 23, of Hillsboro, was performing a technical climb up Wolf Rock when he became stuck after his gear fell to the ground. Takle used his remaining gear to anchor himself to the rock and called for help.

Linn County Sheriff’s Office, Corvallis Mountain Rescue, Lebanon Fire Department, Sweet Home Fire Department and Benton County Sheriff’s Office responded to the rescue. They worked throughout the night to rescue Takle and bring him down safely to the trailhead almost 20 hours later. Takle did not sustain any injuries during the rescue but was carried to the trailhead because of his exhausted state.

Wolf Rock is among the Cascade mountain range and is recognized as Oregon’s largest monolith, rising nearly 1,000 feet above the surrounding area. The monoliths popularity has increased for technical climbers and Linn County Sheriff’s Office has seen this reflected in calls related to the location.