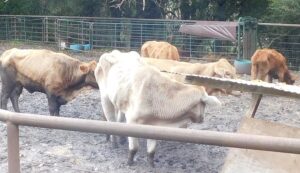 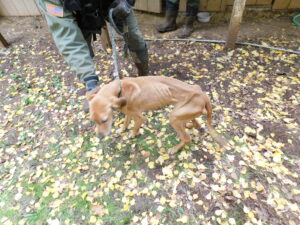 Linn County Undersheriff Michelle Duncan reports yesterday around 9:55 a.m., deputies served a search warrant for animal neglect in the 4100 block of Shimanek Bridge Drive, east of Scio. Deputies received information multiple cows were in various stages of neglect and some were deceased.

Early last week, deputies began their investigation and obtained enough information for a search warrant to enter the location and seize any neglected animals. Upon arrival, deputies quickly learned multiple animals had been neglected for quite some time. Some were too weak to stand without help and stood among carcasses of others.

Fourteen animals were found deceased to include eleven cows, two chickens and one dog.  Six cows and two dogs were seized from the location, but one of those cows did not survive through the night. Deputies continue to work closely with a veterinarian in hopes of getting the remaining animals on a healthier path.

During the search warrant, deputies arrested the owner Lynette McConnell, 66, for 20 counts of Animal Neglect, in the First Degree and transported her to the Linn County Jail.