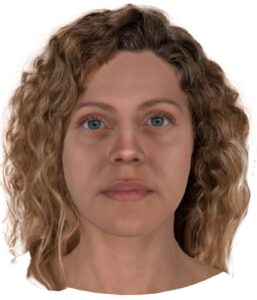 Undersheriff Michelle Duncan reports that Detectives have learned new information regarding the unidentified human remains recovered in April of 2020.  These remains were found near Gordon Road, east of Sweet Home. Linn County Detectives, working in conjunction with the Oregon State Medical Examiner’s Office, have utilized a private forensic DNA service called Parabon Nanolabs to help determine more about what the unidentified female may have looked like.  According to analysis completed by Parabon, the remains likely belong to a white adult female with light brown/blonde hair (natural hair color), fair skin, green or hazel eyes, and zero or few freckles. An updated composite sketch of the unidentified deceased woman has been developed based on this new information, and additional DNA analysis is ongoing in attempt to identify her.

Linn County Detectives have received over one hundred tips regarding this investigation, but thus far the identity of the female, as well as her cause and manner of death, are still undetermined. If you have information regarding the unidentified female, please contact Detective Colin Pyle at 541-967-3950.

Linn County Undersheriff Paul Timm reports that his Detectives and the Oregon State Medical Examiner’s Office have continued to investigate the human remains found near Gordon Road on April 3, 2020.  Detectives and the Medical Examiner’s Office have tentatively identified the remains as belonging to a white female between the ages of 30 and 50-years-old at the time of her death. Additionally, the female is believed to have short, wavy brown hair.