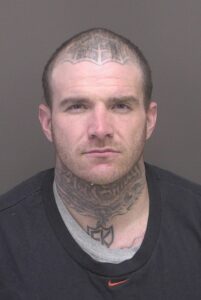 Linn County Sheriff Michelle Duncan reports that on June 16, 2022, Justin Allen Barr, 32, of Albany, was sentenced to 206 months in prison related to a crime spree he committed in Linn County on April 21, 2022.

Detectives of the Linn County Sheriff’s Office served a search warrant on the Chrysler 300 that had been towed as a result of Eugene Police Department’s pursuit.  Detectives seized keys from the vehicle that had been stolen at Point S Tire and Auto as well as merchandise that had been stolen from the 7 Star Convenience Store in Halsey.  Detectives took Barr into custody on April 22, 2022, as he was being released from his charges of Attempt to Elude.  Barr was taken to the Linn County Jail where he was booked on charges related to his crime spree in Linn County.

On June 15th, 2022, Justin Barr was convicted by a jury on fourteen charges related to his crime spree in Linn County.  Barr was convicted of Criminal Mischief in the First Degree, two counts of Burglary in the Second Degree, three counts of Theft in the First Degree, Unauthorized Use of a Vehicle, five counts of Criminal Mischief in the Second Degree, Attempt to Commit a Class C/Unclassified Felony, and Theft in the Third Degree, all resulting in the 206 month (over 17 years) sentence.