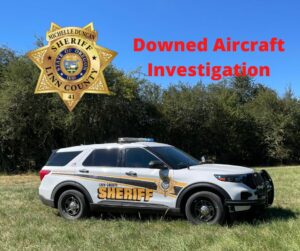 The investigation into a downed aircraft outside of Scio, Oregon is ongoing. The Linn County Sheriff’s Office was notified at approximately 2:03 P.M. today of a single-engine airplane crash east of Scio, Oregon on Richardson Gap Road.

Fire and Medical personnel from the Scio Rural Fire Department, and neighbors in the area who witnessed the crash, were among the first on scene. Deputies from the Linn County Sheriff’s Office were on scene moments later, where they discovered the pilot of the airplane, later identified as 78-year-old Dennis Jackson of Independence, Oregon, was deceased. The second occupant, later identified as Dennis’s wife, Amy Jackson, was transported from the scene by LifeFlight Air Ambulance to Salem Memorial Hospital with life-threatening injuries.

The aircraft, listed as an Experimental Amateur Built Aircraft with the Federal Aviation Administration, is described as a “Dennis Jackson RV-8” single-engine airplane, manufactured in 2004.

The next update for this investigation may be issued at approximately 10:00 A.M.

The Linn County Sheriff’s Office is actively investigating a downed aircraft outside of Scio, Oregon. The Sheriff’s Office is being assisted in their investigation by fire and medical personnel from Scio Rural Fire Department, as well as investigators with the National Transportation Safety Board and the Federal Aviation Administration.

No additional details are available at this time, and an update will be issued at approximately 6:00 P.M. this evening.